My Name is Susan and I Am a Former Curler

It is with much amusement I watch the sport of curling making headlines during these 2018 Olympic winter games.  Even funnier is a Youtube video of people using a Roomba vacuum and a swifter to imitate the curling “stone” and “broom”.  I crack up every time I see it.

Even MORE amusing is the fact I used to curl.

Those who know me are probably laughing at that image, but honestly, I loved it.  It was something to do on a boring Sunday afternoon with other kids my age.  We looked forward to the bowls of chips and pretzels we had as nourishment after our practice (yes – as long as food was included I signed up).   In Junior High you are neither a child nor an adult, so this made me and my group of curling friends feel important.  We got to go to BONSPIEL’S!

I’m not sure how a Russian athlete was banned from curling due to doping, only to lose his medal.  I mean, seriously, how much would using a banned substance affect your grip of the 38 lb stone?  How much faster could one sweep the ice while high?  I’m still trying to figure out if sweeping the ice really does result in enough ice melting in order for the stone to slide faster.  And I was THERE!

We didn’t win any gold medals but we did collect pins.  These went on your hat 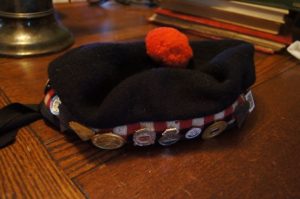 (don’t be too jealous) and were more coveted than the girl and boy scout badges we had, up until now, been accumulating.  Our parents were also curlers which led to Family Curling Competitions.  Honestly – how we all turned out so humble I’ll never know.  What fun we had during long winter days playing a sport no one had ever heard of while spending time with our families as teammates.

And one day they turned the curling rink into the place to store golf carts during the winter.  No more Bonspiels.

Today’s curlers are much more fashionable, have better brooms, and I’m certain have more attractive hats to attach their pins.  They, like we once did, enjoy the camaraderie of being in a sport of which everyone makes fun.  In fact it has become a conversation piece to mention I was once a Curler.  You know, that cool sport in the Olympics that is televised at 3 AM for a non-viewing audience?  So cool that they even had a doping scandal and one team lost their medal?

So there you have it – I am the President of an Information Technology Staffing Company and a former curler.  I think it’s time to update my resume.