Bras Across the Bridge Is Here! An Interview With Feel Your Boobies’ Leigh Hurst

Last year, Feel Your Boobies, the nonprofit breast cancer organization focused on outreach to women under 40, met an audacious goal. The group raised $50,000 from its Bras Across the Bridge event.

This year, FYB founder Leigh Hurst wants to do even better. Her team has set a $60K fund-raising goal for the event, which takes place on Saturday, Sept. 22, on City Island. (You can help reach that goal by donating here.)

We’ll be giving these away at Bras Across the Bridge!

SGC is a sponsor of the event, which is entering its fourth year, and we’re also a longtime supporter of Feel Your Boobies. One of our recruiters, Eryn Foust, even serves on the FYB board. We’re pretty excited about Bras Across the Bridge, so we caught up with Leigh to discuss this year’s event, how it will differ from last year, and how Feel Your Boobies is making a difference.

SGC: How did you come up with the idea for Bras Across the Bridge?

Leigh: This is the fourth year, and prior to doing it, we had never had an event like this one. We’d never really done what I’d consider a public event. We had bar parties and sold tickets, but we never really did something that was out in public where we made it a fund-raiser for support. We decided to try more of a walk model, and the reason that’s so great is people who support what we do can raise money.

We see it as something that can form tighter bonds with the business community, too. We present the event and explain to them what we’re about. I don’t even think Susan knew much about Feel Your Boobies until we had the event, which offered a way to sit down and talk about the organization.

Why has Bras Across the Bridge been so successful?

Although the event is only four years old, we’re almost 15. If we were trying to build credibility and create an event, it might have been more challenging for people to get on board, but we built our credibility around the value of what we do, the seriousness of what we do, even though it’s a disruptive event. So even though we do it in a disruptive way, our history allowed us to get sponsors behind us — although I do think “boobies” will always be an issue for some brands!

What will you do during the event?

This year is going to be a little different.

In the past, we strung together the bras we had donated. Last year we got 1,600, I think we strung 1,000 of them, and people lined each side of the bridge holding them. It’s a good visual, but it’s a lot of standing around, and you can’t hang out with the people you signed up to be on a team with because you have to stand 20 feet apart. For a survivor doing it with their family and friends, it’s important to have that collective experience.

So we tweaked it to become more of a bra parade. People come up with a themed team name, decorate their bras, get a little more fun and silly. So we have a bra decorating party next week — you can come bedazzle them if you’re not a crafty person. 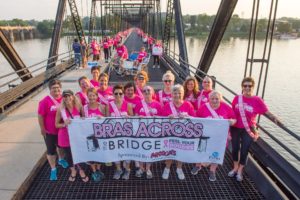 What else will you do?

We have signs made, like you see in a march, that get our message out to people, signs on Front Street and the side of the bridge about young women and breast cancer. We’ll have a pre-party on City Island where we’ll have snacks and Arooga’s will have beer, a DJ, the National Guard will have cornhole set up.

Eventually, everyone gathers, and we’ll start a parade, walking down City Island and across the bridge into the city, then to Front Street, and down to Arooga’s, where we’re having the post-party. Everyone who participates gets a free drink ticket, but the party’s going to be family-friendly.

Do all the bras come from the dry cleaner?

We have 10 locations through Classic Drycleaners where people can drop them off three weeks before the event, in addition to other places, like Athleta and hair salons. We got a box from Florida this year full of donations. It’s fun to watch people get on board even though they’re not local. Once Victoria’s Secret donated 600 bras.

We were always very cautious not to harm the bras, we connected them with tieback wristbands on the straps. By using those, we could snip them apart and donate them after the event to Shalom House and Community Aid.

Why is this a good way to connect with younger women and older women, too?

The people who donate to us aren’t always in the target population we serve. We serve those under 40, our program is college-based. Those people generally aren’t the people who support us financially, so we wanted this event to be young woman-friendly but also connect with women who have money and want to support them. And men too, because they believe in our mission. Because it’s fun, it serves both purposes.

How will you use the money you raise?

We basically estimate that for every $500 we raise, we are able to serve another college. We work with about 200 colleges nationally. 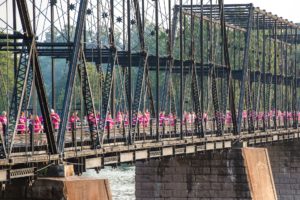 Is there still a perception that breast cancer only happens to older women? Or have you seen that change since your own diagnosis and starting Feel Your Boobies?

I definitely think our campaign has helped bridge that gap. The schools that we serve, I get testimonials from women who reached out to say, I found a lump. I attended your program, now fast-forward to I’m 20 and I found a lump, and the presentation made an impact because of the way it was presented to me. The message got through in a way it wouldn’t otherwise.

I didn’t know this till I really started poking around years ago, but the No. 1 cancer-causing death in women under 35 is breast cancer. When you get it at a young age, it’s very aggressive, so it’s even more important that it’s caught early.

Thanks to Leigh for talking to us about this fantastic cause and wonderful event.

We hope to see you at Bras Across the Bridge! You can still register for the event by clicking here. We’d love to see your pictures from the event — tag us on social media! You can find us at: