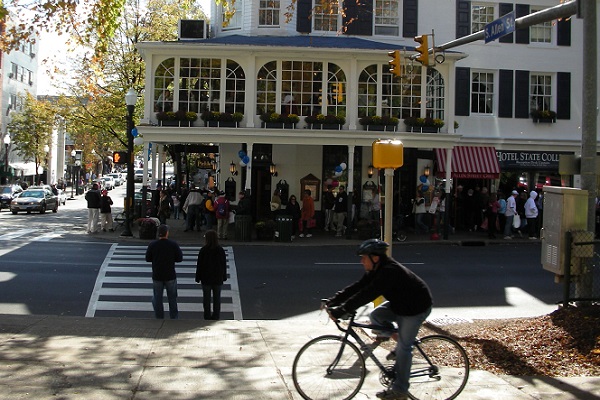 State College, PA, is best known as the location of Penn State University, an excellent research facility as well as home to the Nittany Lions, whose popular football team draws huge crowds throughout the fall. State College is the biggest borough in Pennsylvania, and it’s beloved for its picturesque scenery and incredibly friendly squirrels as well.

Here’s an in-depth look at State College, PA, for those considering relocating there.

School district ranking: State College scored an 8 on a scale of 10 by Great Schools

Click here for information about private schools in State College

Crime rate: Homefacts rates State College as one of the safest towns in PA

Major local businesses: Penn State, of course, drives much of the region’s economy. It’s a major employer, and the presence of thousands of students shapes the retail, restaurant and hospitality businesses in the area.

The downtown has a slew of fun and funky shops, as well as the Student Book Store and lots of places to find PSU gear, like Lions Pride. The four-diamond hotel, the Nittany Lion Inn, has been in business since 1931.

Mount Nittany Medical Center is the second-largest employer in the area behind Penn State. The state government and State College School District are also major sources of jobs.

You can find an extensive list of State College businesses here.

Arts and culture: July’s annual Arts Fest draws more than 125,000 people from around the state to see works of local and nationally recognized artists. The State College Community Theater puts on shows throughout the year, while the Center for the Performing Arts at Penn State attracts world-renown plays and musicians.

And the Bryce Jordan Center regularly hosts the biggest tours in the country, such as KISS and Bruce Springsteen.

Sports and outdoors: There are a plethora of PSU sporting events to choose from, with football at Beaver Stadium the most popular, of course. Right across from the stadium, the State College Spikes, a minor league baseball team, competes.

Fun fact: The Berkey Creamery, Penn State’s legendary ice cream store, offers a six-day ice cream-making class that has attracted people from around the world, including employees of Baskin-Robbins and Haagen-Dazs.